One of the first things on the checklist for any player upon signing their first professional contract is to pick a number and Paxton Pomykal had a decision to make. 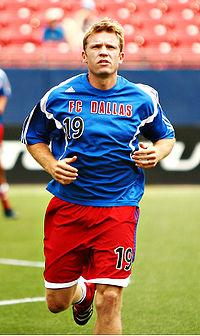 212 games – the second-most in franchise history – were played by Bobby Rhine in the number 19. They were games filled with passion, grit, hard work, a never-say-die attitude and plenty of goals. 212 games that made Rhine the most well-liked player in club history and a true icon. After Rhine retired in 2008, another of the club’s longest-tenured and popular players, Zach Loyd, took ownership in 2010.

However, since Rhine tragically and unexpectedly passed away just over five years ago on September 5th, 2011, the number has been left dormant in memory of Rhine. Loyd took over number 17 and out of respect to the Rhine legacy, it has not seen the Toyota Stadium field in over five years.

It would have been much easier to take another number. A number over 20 was suggested. But Pomykal has never taken the easy route.

Playing with kids years his senior, the 16-year-old was the youngest starting player on the FC Dallas U-18 National Championship team, outsmarting players much bigger and older than him with a relentless work rate. Sound familiar?

“Paxton went to the effort to see if the number was retired,” said FC Dallas President Dan Hunt. “We told him it hadn’t, but it might not be an option for him but he asked if we would consider it.”

Hunt went straight to the one he said the number “belongs” to.

“I went to Bevan [Rhine’s wife] and said that we had a young man who came up through our academy who signed a contract here. He’s a terrific player on the field and wants to wear number 19,” said Hunt. “[I told her] I’m going to leave this solely up to you. If you tell me you never want 19 to ever be worn again, then no player will ever wear it again. She said ‘I have to be honest, I think it would be a great way to honor Bobby’s legacy’ and agreed with that.”

“The decision became an easy one once I learned a little bit more about Paxton - who he is as a player on and off the field, and how he grew up watching Bobby play,” said Rhine. “When Paxton called me to let us know what the jersey means to him, it confirmed that he is deserving of #19.”

Bevan wasn’t the only one who was one hundred percent on board with the idea.

“We asked Zach Loyd’s permission because he was a player who gave up that number on his own decision. He was very much in favor of it,” said Hunt. “Bevan discussed it with Bobby’s parents too and they were in favor of it and so I think it’s great. She just wants to make sure the player who wears that number in the future is a player from our Academy who represented the values of Bobby and the commitment to this club.”

A Tradition is Born

It’s a tradition that isn’t unprecedented to FC Dallas head coach Oscar Pareja. The Colombian was national team teammates with Andres Escobar, the defender who was murdered after the 1994 World Cup. Having played over 200 matches at famous Colombian side Atletico Nacional, Escobar’s #2 in the green of Nacional was untouched for over 15 years after Escobar’s death.

In 2012, Stefan Medina, a prized product of Nacional’s academy, was presented with the #2 and went on to play over 100 games for the club in the famous number winning a half-dozen trophies.

“The fans wanted to refresh Andres’ memory and give it to a kid who was born in the academy and represented the integrity and the culture of what Andres Escobar did for that club,” said Pareja who noted with a smile that it was for his rival club. “It helped for healing, it did. I think not just that, but it helped to make the image and memory of Andres bigger and bigger and that’s the idea here. It’s the representation of a kid who was the heart of the Academy and culturally represented it. I know Andres would have been very proud and in our case it is the same.”

“I think it’s a great gesture from the kid to be proud to wear the number and understand it. For all of us, it’s an emotional moment to give that moment to one of our kids. Somebody who has been raised here in the Academy.”

“Paxton understands that in addition to contributing to the team on the field, it is equally important to be a good teammate when there is not a stadium full of people watching you,” said Rhine. “He is a gifted soccer player, but very humble.  He works incredibly hard to continue to improve himself as a student and as a player.  And like Bobby, he is instantly likeable.   I know that Bobby would be flattered and fully supportive of passing on the #19 to Paxton.” 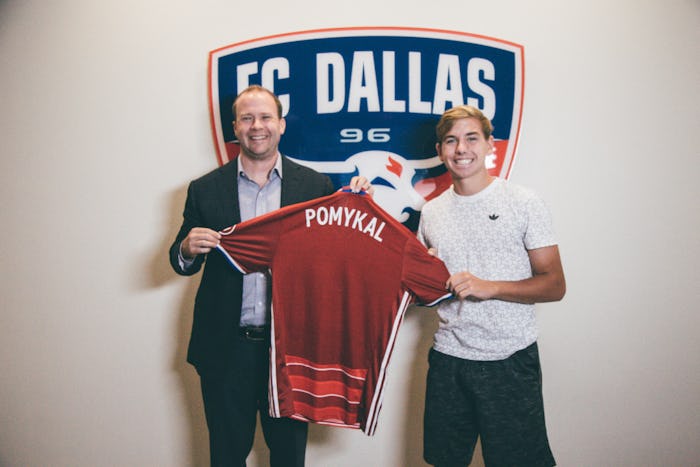 A two-time National Champion at U-16 and U-18 level, Pomykal knows the significance of the number. A true Homegrown who has never lived farther than 30 miles from Toyota Stadium, Paxton was born the year Rhine was drafted to the club and was in the stands for plenty of those 212 matches.

“His legacy is great. He’s a legend here and growing up I watched him a lot because I was always at the games as a kid,” said Pomykal. “I play like him because he always had a really good mentality. He always worked hard and played for the team and that’s someone that I look up to as a player and try to model my game as.”

While it has only been five years since Rhine passed away and his memory still lives fresh in Frisco, dedicating the number to future Homegrown players insures his story and values are passed along for decades to come. Going forward, $5 of every custom #19 jersey sold in the team store will be donated to the FC Dallas Foundation. BR19 will never be forgotten.

“You’re little and think ‘wow he’s number 19, I want to be the next one’ it will build a story for the Academy and just make the legacy stronger,” said Pomykal. “If it’s retired, maybe you don’t remember it as much as if we build a legacy and then the next one and the next one. It will be tagged as Bobby Rhine’s number and I think that’s brilliant.”