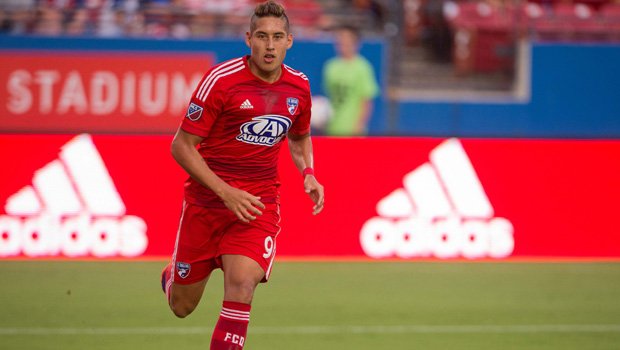 FRISCO - Perhaps no one deserved to show up on the scoresheet in Sunday’s win over Columbus more than David Texeira.

The 24-year-old Uruguayan put the exclamation point on his solid summer with a goal and an assist in the emphatic victory.

“It’s important for us and for everybody,” Texeira said about the win. “People are missing with the national team, but we can see when young players step on the field that we just say young, they are men. Everyone on the team is ready to play.”

This summer has been a stark contrast to last year for Texeira. After arriving early in the season from Dutch side FC Groningen, it took the Uruguayan some time to adjust to the league. Through the months of June, July and August in 2014, Texeira struggled with injury and form playing only three games and 39 total minutes in the three months. However, in 2015, Texeira started eight out of 12 games through the same three months with FCD going 6-1-1.

A recent move to a 4-4-2 has brought out the best in Texeira’s game with both Tesho Akindele and Michael Barrios partnered next to him in recent weeks. Not only has it created more havoc when FCD pushes forward, but the two up top have done a fantastic job of hassling defenders into turnovers when they have possession sparking counterattacks and limiting opposing offensive chances. FCD hasn’t allowed a goal in the two games since moving back to the 4-4-2 formation.

“When we play with two strikers, it’s good confidence to play with each other and help,” Texeira said. “And for the team I think once we put pressure, we keep the ball and sometimes maybe we miss the control of the game but we have other things like diagonal runs off the ball, one is moving and the other is going another way. So it’s a different style of play, but we have confidence in it.”

READ: It's young guns vs internationals on Saturday night at Toyota Stadium

And head coach Oscar Pareja has plenty of confidence in Texeira.

“Sometimes when we think about keeping the zero in the back, you refer just to the defenders but the team defending starts at the top,” said Pareja. “David is doing a fantastic job in that part and I think he’s showing that his fitness is in his best form and has been key to the unit because at the end of the day, defensively, it’s a unit work.”