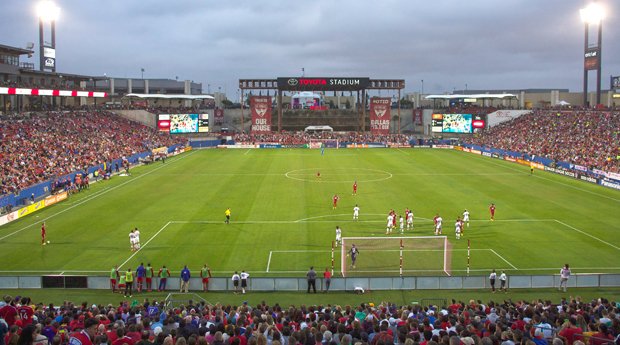 There’s a common saying when raising a child that the days are long and the years are short. As Toyota Stadium officially turns ten years old today, it’s an axiom that rings true for the home of FC Dallas and soccer in north Texas.

After an on-again, off-again and eventually-dead partnership with the city of McKinney, the Dallas soccer club finally reached an agreement with the up-and-coming city of Frisco to house the MLS club at the corner of Main Street and the...well, sort of…Dallas North Tollway just north of city hall. It was a bold move from Lamar Hunt, a man known for his bold moves.

“I had no idea where Frisco was,” said office manager Suzie Garza, who has been with the club since 1998. “When they said Frisco, you start thinking ‘where in the world is that?’ because there was no tollway and you had the idea about the big, big mall but that was a [long] trip so I’m thinking even farther than that?”

At the same time, the move was potentially life-saving CPR for a club who had been dogged with contraction rumors for years. The new Frisco stadium – with a revolutionary 17-field complex – would be the first of its kind in the American soccer landscape and a harbinger for things to come.

“It was really hard to put into words because there was nothing to compare it to. There wasn’t a place like this that was so unique where you can have a fully-fledged pro outfit fully compact and then a 17-field complex that is state of the art,” said FC Dallas director of juniors player development Chris Clarke who is in his 18th year with the club. “If you had asked me in 2003, you just couldn’t imagine it until you actually saw it. It’s almost like a game of telephone ‘by the way I heard this’ but you add something else ‘it’s got this amazing thing to it.’”

The promise of Frisco was still a vision, but what was now reality for the club was stability.

“Being in an office where you can look outside and see the fields, the team training here and this being the epicenter of FC Dallas was really cool and did change the mindset,” said Clarke. “It helped with the transition from being league-owned to Hunt-owned and the transition to FC Dallas. This place really did help to personify that and really give it the renewed energy it needed and give the belief that this place is not going away.”

Matt McInnis, Vice President of Business Development and Partnership Marketing, has been with the club for two stints including the opening of the stadium and played an integral role in the original name, Pizza Hut Park.

“At the Cotton Bowl, we’re sitting there putting up [advertising] banners with zip ties taking them down at the end of the night. It was a workout,” said McInnis who noted the Toyota Soccer Center complex and stadium accounts for over 10% of the entire revenue of the city of Frisco. “It was extremely unique because it wasn’t just a stadium, it’s a 145-acre complex and there was nothing like it - which is [how we sold it] - nothing like it.”

Torrential rains in the spring of 2005 that had “port-a-potties floating as bobbers” in the stadium bowl meant a delay in the stadium opening until August 6, 2005 and, despite a limited capacity of a little over 15,000 due to the stadium not being entirely finished, long-time members of the domestic soccer community knew what a milestone it was for the sport in America.

“It was exciting. I remember walking out there with [former FC Dallas head coach] Colin Clarke and we were just looking in awe,” said assistant coach Marco Ferruzzi who joined the club in 2005. “I’ve been here all my life as a domestic player and seen the game grow and to see it and think ‘wow we’re opening this up.’ To see it from him, someone who has scored in a World Cup and still have this feeling, it was impressive.”

“I remember with my family looking around and getting teary-eyed because it was such a special moment with the opening and such a special time with everyone and all the blood, sweat and tears we put into this with the commitment the Hunt family made and working with the city,” said McInnis. “From where we were to where we came at the grand opening was really emotional.”

In many ways, the growth of Toyota Stadium has mirrored the growth of the beautiful game in this country. After an initial honeymoon period, there’s no denying the stadium went through some doldrums as the growth of Frisco caught up. But it caught up and now there’s no looking back.

2014 brought a year of record attendance, game atmospheres never seen before, record partnership revenue, the return of Oscar Pareja as head coach and a true breakthrough of Homegrown players into the FC Dallas lineup. 2015 has seen FC Dallas at or near the top of the Major League Soccer standings with a clear philosophy and stable of young players signed to long-term contracts with long-awaited trophies within the club’s grasp.

Outside the stadium, Frisco continues to remain the DFW boomtown with literally billions of dollars of developments coming within five miles including Gearbox Software moving in across the street, Toyota’s United States operations moving in a few miles down the road and the Dallas Cowboys coming as close neighbors. Bars and restaurants line the streets around Toyota Stadium and perhaps nothing better exemplifies the jewel we have here than the fact that four national teams trained here prior to the 2014 FIFA World Cup.

Population growth in Frisco is truly stunning as a city that had just over 33,000 residents at the turn of the century will pass the 150,000 mark within the next few days. Every year, Frisco is at or near the top of the best cities to live lists and FC Dallas has become an integral part of a community that perfectly reflects the rising nature of the club.

“Watching Frisco develop and grow, I’ll continue to use the word ‘visionary’ because the Hunts knew that this was going to happen. It wasn’t going to happen overnight and there was no tricks and you have to believe in something and put your heart and passion into it and it’ll come,” said Ferruzzi. “We could not be more blessed to be in a place where soccer from the very youngest age to the most professional level is happening in one place. I still ask the question who else is doing this in the league?”

The finish line is far from sight for what Pareja likes to refer to as “the project,” but milestones like the one reached today serve as a reminder that days like this truly are the only times FC Dallas – and soccer in this country – will ever be looking back.

“It’s beyond gratifying man, it’s visionary,” said Ferruzzi. “There’s no other word for it.”